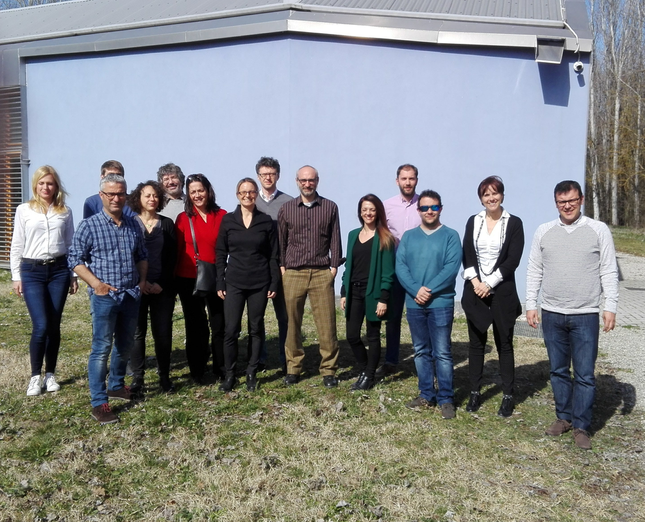 Over forty, among administrators, technicians and operators in the energy saving sector, coming from France, Slovenia, Spain, Portugal, Greece and Malta, were in Modena on the 6th March to attend the STEPPING training activity over Energy Performance Contracts – EPC.

The day started with a brief introduction by the Lead Partner Silvio De Nigris over the main STEPPING project content and objectives as well as over the EPC schemes as effective tools for really improving the energy efficiency of public buildings.

Then a session over different approaches, tools and experiences in some countries opened. The host – in the person of the Director –presented some real cases over EPC experiences AESS has carried out so far. Then it was the turn of Jean Leroy and Pascal Lebreton reporting about the French approach and adopted EPC models in their countries.

A Spanish focus followed, since Anna Camp for the BeeEnergi project as well as Javier Martinez presenting the ENERINVEST platform joined.

Finally, a training session over tools developed for easing the adoption of EPC schemes closed the morning. One tool has been developed in the framework of STEPPING project and was illustrated by Stefano Dotta from ENVIPARK, while the other tool was created within the Med project SISMA and Stefano Pagani from Energy Agency of Friuli Venezia Giulia presented it.

The second part of the day consisted of a study tour over 3 public buildings belonging to the Municipality of Modena, recently retrofitted thanks to an EPC contract.

After a short presentation in order to contextualise the selected buildings and the related EPC, Mr Michele Bocelli, energy manager of the Municipality of Modena and Mr Franco Buscaroli, manager of the awarded ESCO, drove all the guests to the onsite visits.

The first visited building was the sports hall called PalaPanini and known at Italian level as Volleyball Temple since it is currently hosting one of the best team in Europe. Here there was some problem with the high energy and maintenance costs of the previous lighting system as well as with minimum lighting levels for TV shooting, despite the lighting system was only from 2010. It has been replaced with LED lighting system, which, among the several benefits, has the smart one to be modulated through dimmers according to the several needs or activities of the day such as high definition television shooting, volley team training, cleaning and maintenance, allowing this way a power reduction up to 4% of the maximum power and generating therefore significant savings.

The second visited building was a secondary school where a big insulation over the 5.000 sqm walls was implemented. Here panels of mineral wool were used. The 3rd and final building was a complex composed of 3 buildings, where not only 1,600 sqm of walls were insulated but where also the roof – previously in very bad conditions – needed a retrofit measure. Here the previous 7 layers were removed and an insulating layer of high-density EPS (18 cm thick, on average) and a double waterproofing sheath were installed. Furthermore the final layer will be soon painted white, to complete the full implementation of the "cool roof", which could be an interesting and very cost-effective measure for most countries of South Europe/Mediterranean area.

The following day, on the 7th March, Consortium partners also joined at AESS Offices for the 5th project meeting.